What?!?! Starbuck actually raced in a flyball tournament?!?!

That's right, I said it - Starbuck actually raced in a flyball tournament. It's so crazy that of course it could only happen on a leap year!


I never thought it would happen but it did! Good thing there was a photographer there because now I have proof: 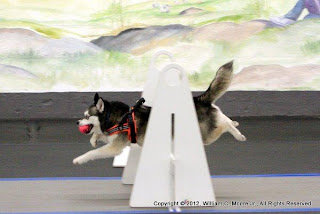 She did it!!! She likes those pink squishy balls with a smiley face.
There's the little Buck-Buck with her flashy pink squishy ball! She got to race in four races, each with three heats. Her fastest time was 5.8 s and that was even with my crappy passing times! She fumbled once (ball went way outside the jumps) but she picked that ball right up and found the jumps and saved the run! What a good girlie! 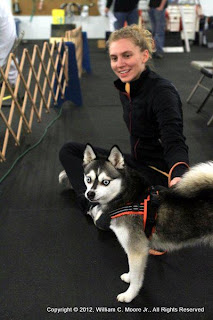 Here she is, looking kind of crazy and wanting to chase the dogs racing.
It's hard working with a high prey drive dog in flyball.
She did manage to loose her mind during the last race of the weekend and crossed over into the other lane to run with a German Shepard. But I think it was because she was so tired and overstimulated - have any of you ever been to a flyball tournament before? Those things are madness - constant barking and yelling. Even my brain was fried by Sunday afternoon. 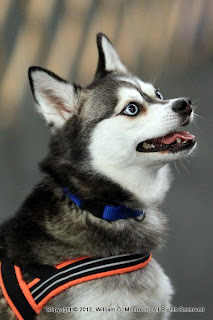 And here she is posing for the photographer looking all pretty
in her racing harness.
Starbuck was definitely the star of the tournament. No one had seen an AKK before so she had everyone coming up to her to pet her. And the photographer took that beautiful picture above of her and gave me a print for free. Starbuck always manages to get some freebies :) I bought a CD of the tournament photos so hopefully I'll have more racing pictures to post in a couple of weeks. 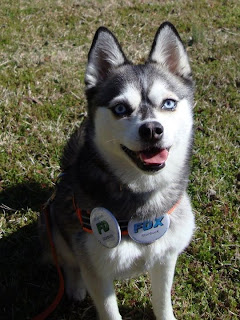 
It feels like it has taken us forever to get to the point of racing but Starbuck definitely had a blast and was so happy to be out there running. We are so lucky to have all of our teammates on the Big Orange Blast to help us out and the flyball goddess, Kate, in Chattanooga. Kate was the one who finally solved the puzzle and taught Starbuck how to catch the ball!
Posted by Steffi at 7:44 AM No comments: 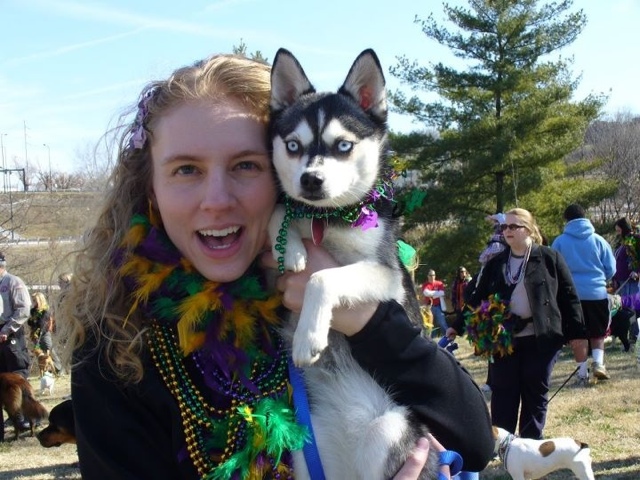 Pretty much the cutest inmates ever! 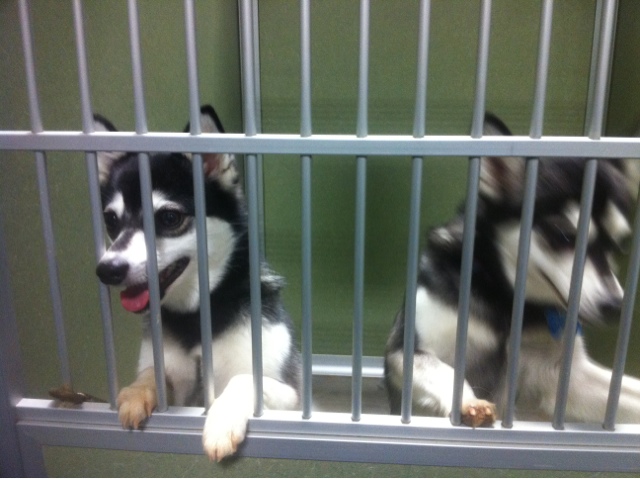 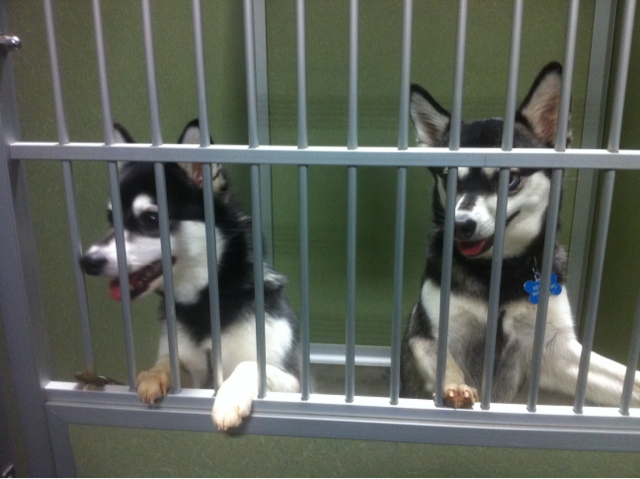 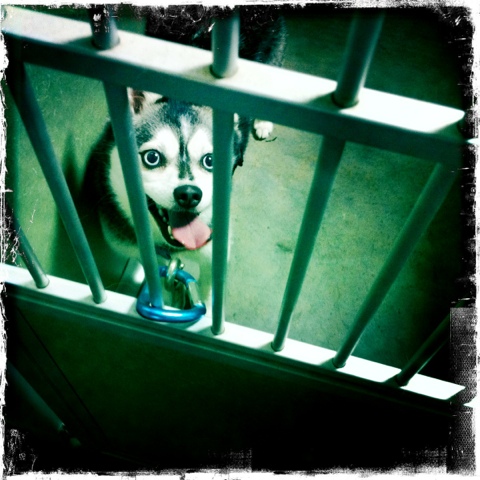 It's time for another Tell Me Thursday 2012 brought to you by Laura over at Crooks and Crazies!

1. Jorgen would like to know what skill would you like to have that you don't currently have?
I would love to be able to better read my dogs. My trainer is so awesome at reading dogs and I've noticed it makes training go so much smoother.


2. If someone were going to play you in a movie, who do you think it would be?
I LOVE Reese Witherspoon!! She's totally adorable and sounds like an awesome woman.


3. Kelsey wants to know what is a quality that you admire in a dog but would never fit with you?
Super high drive dogs that just keep on going forever! I'm think I would probably freak out if I had a dog like that. I'm not sure I would know what to do with them even though I would love to try to train one someday. 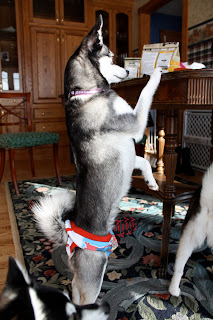 And of course I have to have a random dog picture...

4. If you had just enough money to pay someone to do one chore for you, what would it be?
Does cleaning count as one chore? If so, I totally want that! Otherwise - cooking! I had this awesome skill of dating guys in college who cooked for me. Then I got married so I never learned how to cook - which makes it rough when the husband is out of town!


Speaking of cooking/baking - I was totally dreaming of eating butterscotch rice krispie treats with chocolate on top (yes, I dream about eating food a lot!) a couple of days ago. Then I woke up all sad because I didn't have any and there was no way I was going to make them. Just yesterday I got a package from my sister and in it was BUTTERSCOTCH RICE KRISPIE TREATS COVERED IN CHOCOLATE!! WHAT?!! I so never mentioned that dream to my sister and she hasn't made those in years. I'm like 99.9% sure I'm a food psychic!! 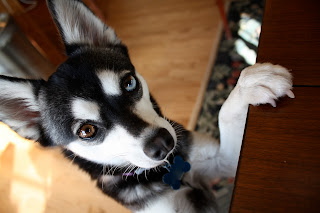 And one more random doggie picture!

And now I'm going to leave you with a little video of how excited Alpha gets for her meals:

It's so great to see her loving her meals again considering we almost lost her back in August when her kidneys failed.

We love the vets at the University of Tennessee College of Veterinary Medicine!!
Posted by Steffi at 4:57 PM 1 comment:

Another Thursday goes by and it's time for another Tell Me Thursday brought to you by Laura over at Crooks and Crazies.

But first, here's a crazy cute picture of Starbuck in her flyball gear: 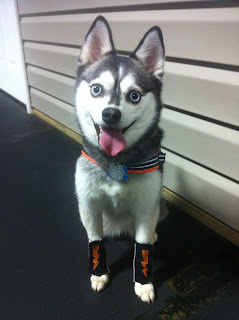 Yes, those are LIGHTNING BOLTS on her boots! Why? Because she's awesome!! :)


1. Robin wants to know what your ideal number of dogs is?
If I'm out walking the dogs by myself - I'd say the ideal number of dogs is probably 2. Would be more if my dogs hadn't been attacked by a boxer and now go crazy if a dog comes towards them :( We have 3 but I think I could probably go up to 4 or possibly 5 if we're just talking about dealing with them in the house by myself. But I think I'll be sticking with 3 for a while. Three seems to be a great number. 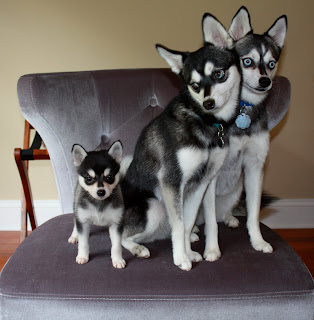 Plus Nari isn't too fond of new dogs. Just look at how she was
glaring at tiny baby Alpha when we got her!

2. Lora wants to know if you find that your dogs are better or worse after time off from training?
My dogs are fine with time off from training. I'm the one with the problems! I'm clumsy and if I take a while off from training with them then I notice that it takes a little while for my timing to get better. One thing I've notice - their distance skills tend to not be as strong if we take a really long breaks (two months).


3. What is your favorite power tool? What power tool do you wish you had?
Hmmm... power tool? I guess it would have to be one that I'm not afraid of... so a drill or dremel.


4. What did you want to be when you grew up?
When I was little I wanted to be a scientist and help people. Now I'm grown up and a scientist. I guess I wish that my younger self would have been warned that for some reason people think they know more about science than scientists and data and think we're just wasting their money so they cut our budgets... and somehow make it all political... Oh well, I guess people really don't need clean energy... Can you tell I'm in a bitter mood lately about budgets? :)


Seriously, I do love what I do, I know I just need to not worry about what people are saying. Like Nari. She doesn't care that we totally make fun of her sleeping with her legs spread wide open. Nari does what she wants! 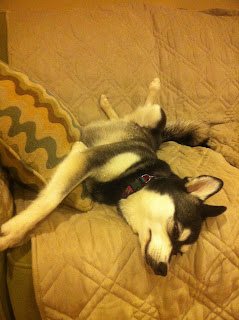 5. How many of your friends are not "dog people"?
Most of my friends have dogs, but I wouldn't call them "dog people". They have dogs that they occasionally walk but that's about it. I guess I'm the only crazy one! But now that pretty much all of my friends just had a kid or are about to have a kid (and I don't have any) then maybe I'll find some dog friends...


Well... that's it for today! Hope everyone has an awesome weekend!
Posted by Steffi at 9:47 AM 5 comments:

And I'm late again for Tell Me Thursday.... but better late than never, right?

1. Julie  would like to know one frugal tip this week.
I love broccoli but I absolutely HATE eating those gross stalks. Oh, and I hate paying to dog treats that are made with a bunch of crap. But guess what - my dogs LOVE broccoli stalks! Whoohoo - free dog treats!


2. What are you reading this week?
I don't like reading. About the only thing I read is papers for work. But my friend was telling me I should check out "The Art of Racing in the Rain". She said she never reads books but actually liked this one so maybe someday I will think about reading a non-physicsy book and try this one...


3. Barbara  wants to know: do you hit the snooze button on the alarm clock and if so, how many times?
I hit the snooze at least 2 times in the morning. It drives my husband crazy but I still do it!


4. If you had to travel in a sedan (or if you already drive a sedan type car) and you had five or six dogs, how would you handle it?
If I had to, I'd make sure they were buckled up. I've been rear ended by a texter before and ever since that I always make sure my dogs are secured in a crate and if for some reason they can't be crated, they have harnesses and seat belts. 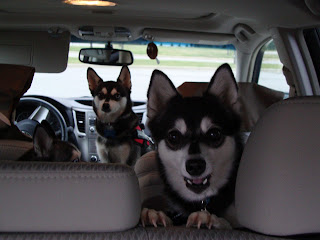 5. How much do you filter what you put on your own blog?
I think there have only been a couple of times where I have pulled a post. But it's really not that often. I am the kind of person who will pretty much answer anything and don't see a reason to hide things from people. Kind of gets me in trouble sometimes when I just blurt out personal questions to people... now I always try to think before I speak :)
Posted by Steffi at 8:54 AM 2 comments: