Okay - I swear that Culver's should sponsor us because I talk about it constantly! And after Nari earned her ADCH we of course went to Culver's for dinner :) Nari and I got some butterburger with cheese, cheese curds and some vanilla custard. Yummm!!!!! 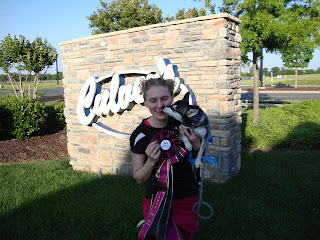 As  you can tell, Nari was quite a happy girl! Maybe she blew all those jokers at the previous trial just so she could get her ADCH in Murfreesboro - the only city near us that happens to have a Culver's :)

Crazy Nar-Nar must sleep in 4 beds!

So we were getting ready for bed last night and Nari saw her favorite bed on top of a pile of 3 beds. Apparently she was way too tired to wait for me to unstack the beds so she jump on top of them all! Oh yeah - an as you can tell from the pictures she has both a red and a green laser eye! 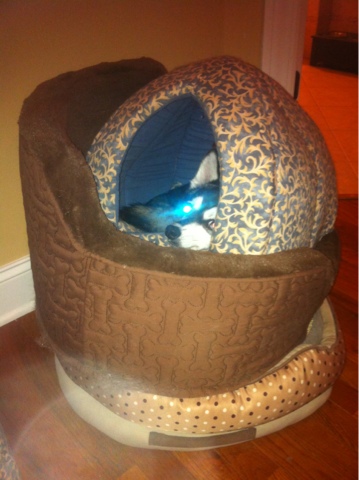 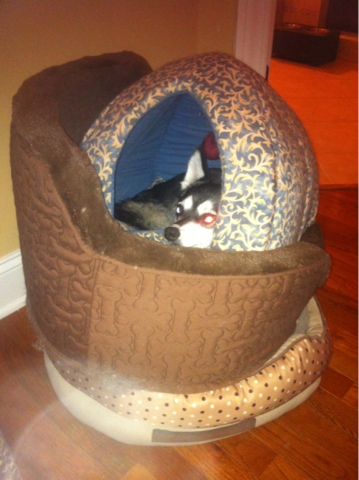 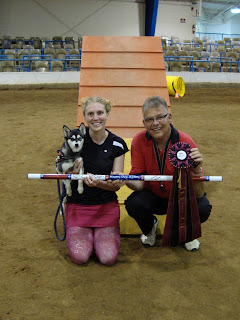 ADCH Nari, Judge Tom Kula and I with our
super awesome ADCH bar and ribbon :) 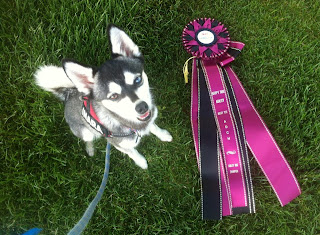 A super proud little Nari with her ADCH ribbon

On 4/28/2012 Nari got that final Masters Gamblers leg and made AKK history by becoming the very first Alaskan Klee Kai to earn an ADCH. It was an amazing run - the joker had a full set of weaves in it and she got it! And she had never even come close to getting a joker with weaves in it before. It was really meant to be - the judge was Tom Kula who was on our very first successful DAM team where we qualified for our first Cynosports. It was so great that all of our friends were there to cheer us on during that run and our victory lap. I wish Ace could have been there to see it but I realized afterwards that in a sense he was there - those weaves in that joker were designed by him. 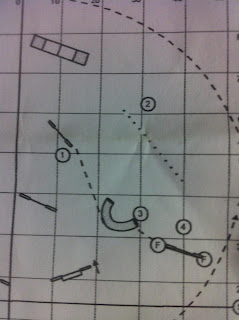 Here's the joker that Nari got - we wrapped the jump before 1, she ran towards the A-frame, I redirected her to the weaves and she raced through those, almost took the 4 but was able to call her off that and into the tunnel. Everyone gasped when Nari headed towards that A-frame - but then there was lots of cheering when she got it! And then someone ran out with our bar and ribbon and we got to run our victory lap and it was awesome :) Nari was so proud of herself, she just gets so happy when she does something by herself. 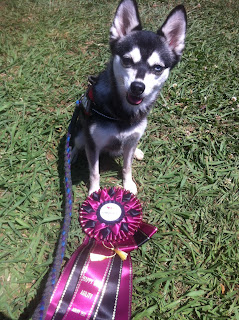 I took this one right after we ran.

I never got video of that final ADCH run and victory lap but I really don't mind. It was never about getting that final leg after all, it was really just about the journey and that special silly little dog, Nari :)

Huge thanks goes out to Ace for being such an amazing instructor. He was always there for us, he put up with my frustrations and was patient with me and replied to those early morning emails about how to handle those jokers. And he never, ever gave up on us!

And thanks goes to Dr. Donna for helping Nari when she got injured during the Chicago Regionals and for all of her advice and for listening to me and telling me that I wasn't crazy.

And thanks to Del Mar Klee Kai for trusting me with such an awesome little girl. Nari was never supposed to be mine. She was just a little puppy going to a show home in CA and was named PR' Del Mar's Azure Blue Sky. At the last minute her family could not take her so I got an email from April asking if I would be interested in Nari. Some good things did come out of these hard economic times - I got my Nari, my heart dog. 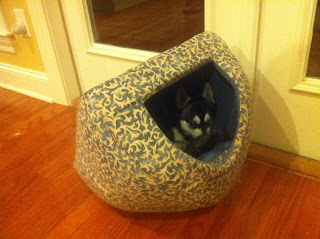 Silly little Nari in her upside down bed!

It's been a rough year - Nari got injured, I got injured and then I was sick during the trial (lymes disease or some other tick disease like it...) but Nari was always there for me and kept me going! What an amazing little dog :)