Look out agility - Starbuck is back!!!

That's right, Starbuck is back to loving agility again! Starbuck was actually the first dog I started training in agility. She was so fun to train - she's pretty much fearless (has run right off the dogwalk and teeter and will go right back and do it again) and loves to run. But when I first started out at trials I was super slow because I didn't have much confidence out there so she would loose interest and get the zoomies. In fact, here is the only video I got from her first run at her first trial:

After that run she managed to qualify for the rest of her runs so she ended up getting her UAGI title. I took her to another trial 4 months later and she ran out of the ring and just didn't seem that excited to do agility with me. Then at practice she wouldn't focus and was more interested in ignoring me so I gave her some time off. Probably gave her about 6-8 months off and then only would do a couple obstacles with her and trained with her for 1-2 minutes at a time. And then about two months ago she finally was more interested in agility than blowing me off so I thought it was time to take her to a trial. And here is one of her runs from a B-match followed by her first run at a trial:

The best part was that she was so happy and had so much fun! I loved seeing that smile on her face after she finished her run! And she loved meeting all the new people and getting tons of treats. Not sure when her next trial will be but I was just so glad to see her have a blast out there. Oh - and it was pretty great when I looked at the score sheet to see that she had the fastest time for all the dogs out there, yep - she was faster than all of those shelties and aussies in the Novice class!!
Posted by Steffi at 3:09 AM 2 comments:

I was looking through all of our pictures the other day and found baby pictures of the girls! Wow - they look so much different now.
Here's a little baby Starbuck: 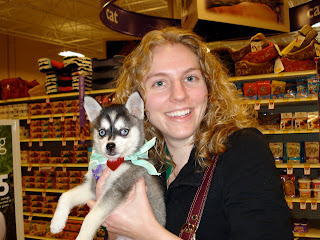 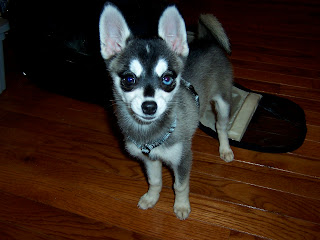 Those ears are bigger than her head! She has finally sort of grown into them, but she definitely has the biggest ears in the family. Starbuck and Nari actually have the same parents, just different litters, but they still look so different now.
And then came baby Alpha - she was the tiniest baby and weighed only 2 pounds when we got her. Just look at her baby picture - she looks like a tiny toy!! 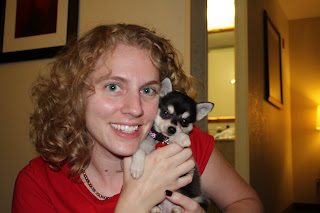 Alpha didn't have crazy huge ears when she was a puppy, I guess that's because she looks more like her mom (she does have the same dad as Starbuck and Nari).
And here is one of the first family pictures we took of the girls together: 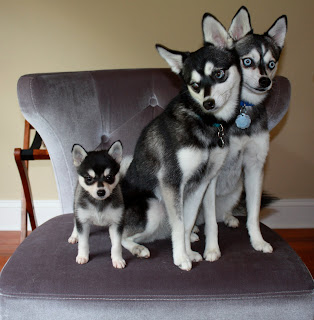 See how Alpha is standing close to Nari and Nari is giving Alpha this look like she can't stand that Alpha is touching her? Yeah, Nari totally hated Alpha when we got her. I think that Nari was (and still is) so attached to me that she was jealous when we got baby Alpha. So we kept Nari and Alpha separated with a baby gate for a week until they got used to each other. Then they just started wrestling all the time and they've been best friends since then. And I think Alpha just kept forcing Nari to cuddle with her until Nari got over it :)
They look so different in their baby pictures, but I definitely love how beautiful they look now.
Posted by Steffi at 7:30 AM 2 comments:

Oh, Alpha, can you be any cuter? 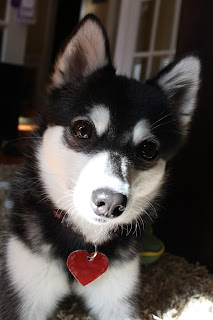 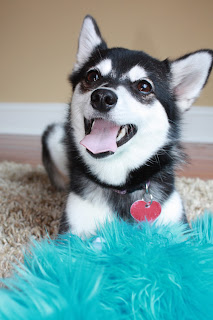 What's that? You can even do adorable tricks?
Oh, Alfalfa Sprout - you are the cutest puppy!
Posted by Steffi at 8:23 PM 1 comment: