WOW - what a great weekend! No, actually I think it was an amazing weekend :) 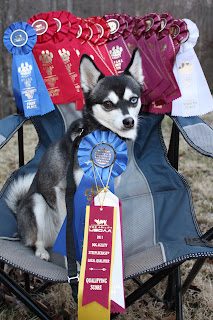 I packed up the car last Friday morning and Nari and I headed off to Holly Springs, MS for the 4 PAWS USDAA trial on Saturday and Sunday. I think that was the first time I had ever been to Mississippi before. I usually don't drive that far for a 2 day trial, but everyone in that club is so nice we made the drive to support them.
We were entered in all three tournament classes and a couple of titling classes each day. The trial secretary was awesome and found a team for us right before closing - we were teamed up with a JRT named Han Solo and a BC named Rex - both of which were super fast and their handlers were so much fun. Our team did really well and we qualified!! We were all so excited because it was the first team Q that each of the dogs had gotten. We were pretty close to the cutoff line (and were under it for a class or two) but we held it together during the relay. Nari pulled off some great runs during her team events, I was just so proud of how hard she worked! Here is a picture of team "Han In Rex": 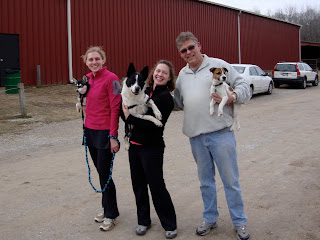 Here are some highlights:
We won both the Steeplechase and Grand Prix tournaments for our height.
We got 8 Q's - and I think we got a Q in all of the individual events in DAM.
Besides the 1st places in Steeplechase and Grand Prix, we took 2nd in everything else.
AND....
...I'm pretty sure we qualified for the 2011 USDAA Cynosport World Games Agility Championships in Steeplechase and DAM!!!!
I am of course waiting for the USDAA office to confirm it because I'm always paranoid about that kind of stuff, but it will be a while before the results get recorded...
And the awesome sheltie handler in our height group (she takes 1st pretty much all the time and has killer runs) came up to us and said, "Wow! You guys were the sh*t this weekend!" as we were leaving :) That meant so much to me :)


We also had a great handler in Masters tell us that we handled a hard jump combo with a wrap the best he had seen so far, I couldn't believe it :) Huge thanks goes out to our trainer, Ace, for helping us with our jump wraps!


I worked my butt off this weekend on trying to keep my focus, keep my energy up and not give up and it really payed off. Such a fun weekend! Now we need to keep working on increasing our speed and some other fundamentals. Agility is so much fun! 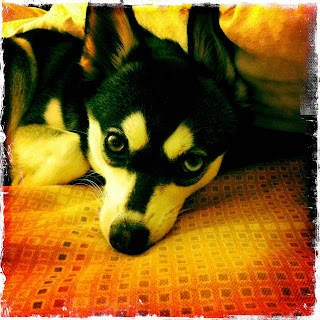 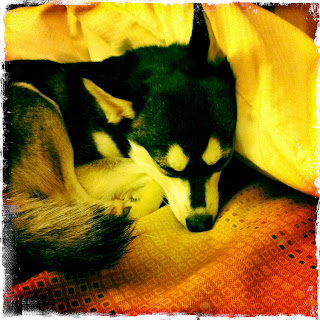