Nari goes to another USDAA Regional!

Well, Nari went to her second USDAA Regional this past weekend. We flew all the way to Kansas City to compete. Normally I wouldn't go that far for USDAA except that we had an awesome DAM team lined up with TWO World Team members - my good friend Jean and her sheltie Cheer and Cassie with her poodle Bliss!! We were '16s In Cheerful Bliss' :) Sweet! Our team was in first place through pretty much the whole weekend but our team had one little off course so we dropped down to 8th. Still super impressive considering all of the talented teams there and that our whole goal for the weekend was simply not to be an asshole to anyone. Seriously, that was our goal :)

Nari also took 1st place in the local Grand Prix tournament and made it to both the Grand Prix and Steeplechase finals! She ran clean in Grand Prix finals and was in 5th place with a bye. It was actually a crazy experience because someone forgot to set the timer so we had to re-run for time. Of course our second time through we were tired so we weren't as fast but we were happy to get another run for free!

Oh - and we also made it to the 'podium' for the Master Challenge Biathlon Tournament. This time we took 3rd place! 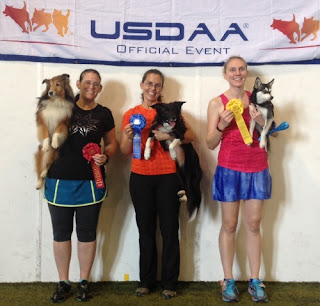 See that little BC who took 1st? That's Smitten and she's AMAZING!!

Wishing everyone a great weekend!