And so it begins….

Well - after being out of agility (practice and competition) for over a year, Nari has had 2 trials and a couple of practices in the past month. It's been an eye opening experience. Now that she's starting to get back into running I'm realizing that she hadn't been running at her full potential since Perry Regionals back in June 2013 - that's nearly 2 years!!!

Back then she was a very consistent team dog - she was typically the one who held the team together :) But…. this weekend we were a hot mess! Although it was very frustrating at the time, it's actually quite exciting to see how much better she's feeling - she's like a puppy again! She ended up getting an E in team jumpers - actually blew me off to run into the wrong end of the tunnel. She either won a class or bombed it! Most people would be mad at that but actually it was nice to see that she's feeling well enough to blow me off :) Just means that we actually need to practice to get back to being a team again :)

I know I'm being greedy now by trying to get her qualified for Cynosports as I should just be content with her running again but I think she has a chance. Even with being rusty and not fully conditioned yet she's managed to pick up 2 Steeplechase Q's (in both tournaments she won both rounds 1 and 2) and a Grand Prix win with a Regional voucher. We totally bombed our team Q this weekend but I guess I really needed that to kick my butt and teach me a lesson that I can't just rely on how she was performing a year ago - we actually need to practice :) 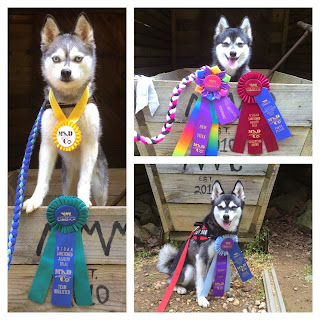 Okay - so I know I went on and on about Nari up there but Starbuck and Alpha were awesome this weekended!! Starbuck was a rockstar - taking a couple of 1st place finishes and I don't think she even E'd in team. Her team picked up a 3rd place and team Q. Alpha was so so super cute - I think she's becoming everyone's favorite AKK :) She finished her PII Snooker title and even picked up a PIII Snooker Q. I honestly can't remember how she placed/finished her other runs but she had a killer PII Gamblers. I didn't think she could do the 15 foot send to the teeter and jumps so I wasn't a bunch of time getting to the line once the buzzer went off. But she pulled off that gamble - just over time.

Well - now the race is on to get Nari qualified for Cynosports and she has 3 trials to do it in - of course they are all Regionals because I like to make things hard :) It'd be awesome if she can qualify but if not, I have Super Buck to run and she's becoming an amazing agility girl - have you seen her super fast rockstar weaves? :)