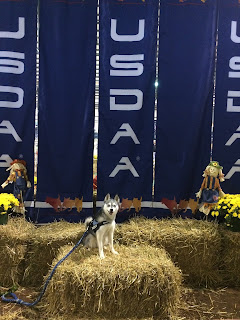 Last week was the 2015 USDAA Cynosport World Games and both Starbuck and Nari got to play :) Some people may remember the early days of Starbuck's agility career - some running out of the ring, doing what she wanted, 'bucking' around :) Well - little Starbuck is all grown up now and she got to run in the team event as well as in the Steeplechase semifinals AND the Grand Prix semifinals!!

She was oh so very close to making the Grand Prix Finals - I learned the hard way what the teeter rules are :( but she was fast and happy and had a blast.