One of our teammates, Adam, brought his camera to flyball practice again and took some amazing photos of Starbuck!! We were working on her focus with distractions so they had a dog running loose in the room, lots of yelling and balls bouncing everywhere. Since I had taken her on a hike right before the lesson, she was more tired than she usually is and her focus wasn't as good. We also had the orange cone too far to one side so that made her box turn too wide but once we corrected that she was catching the ball. Here are a couple of pictures followed by a video: 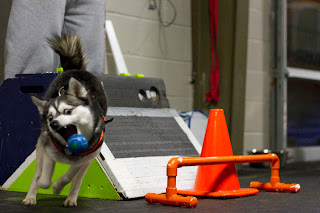 Starbuck fumbled the ball and then caught it on the bounce! She actually had two of those that night, and one didn't even have time to bounce - I'm quite impressed with how hard she's trying to get that ball. 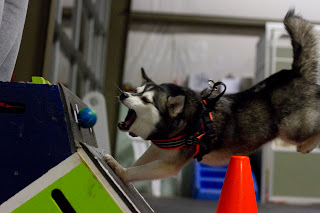 Starbuck going in for the catch! 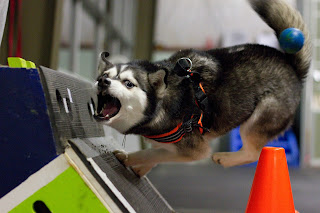 And Starbuck totally misses but it looks like she tried pretty hard to get that one.
Here is a video with all of the photos:
Posted by Steffi at 5:40 AM