Alpha is madly in love with tiny, squeaky tennis balls. When she gets up in the morning she'll race into the living room to find a tennis ball and then she'll pretty much carry it around all day long. And when she's not carrying it around, she holds it between her front paws and sometimes she'll have a huge smile: 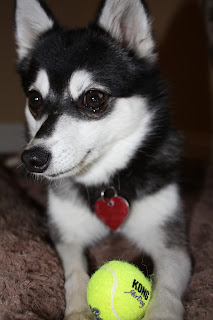 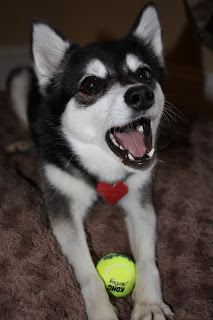 She also likes to stand in front of us and let out one loud bark every minute until we give in and throw the ball to her repeatedly. 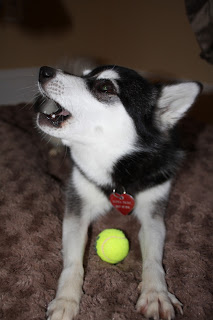 She's always been obsessed with tennis balls since she was just a tiny puppy. Here's a video of her catching tennis balls over and over and over when she was 6 months old:
Not sure where she got it from because we never taught her to catch, she just found a tiny tennis ball lying around and it was love at first sight!
So... how many dogs out there are getting rid of their winter coats and growing in shiny new spring coats? Nari decided she had enough of her winter coat so I've been brushing her. This is the second time she was brushed this week: 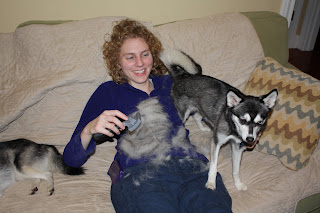 I'm still amazed at how much fur these guys have in their undercoat - where the heck does all this fur come from? And this was the second time I brushed a huge furball off Nari in the last week. By the way, they are totally worth all of the grooming work (which really isn't that hard) and all of the fur tumbleweeds I pick up around the house.
One more thing - we have another follower!! Thanks so much to everyone who follows us and posts comments:)
Posted by Steffi at 9:45 PM